Dutch activist Erwin Vermeulen traveled to Japan last year to serve as Cove Guardian volunteer for Sea Shepherd Conservation Society. In Taiji, Japan, dolphins are captured for sale to the captive cetacean industry and the remainders are slaughtered by the hundreds annually. While photographing the atrocities to report them to the world , Vermeulen was arrested on a false accusation, kept in solitary, spartan conditions with poor nutrition, not allowed contact with loved ones or anyone other than his lawyers or consulate. Sixty-four days later, he was acquitted and released.

Noun: A person, typically a man, who is admired for courage or noble qualities.

We think this definition suits Erwin well. Currently, this hero is serving as crew aboard the SSCS vessel Brigitte Bardot which is soon to set sail to intercept Japan's whaling fleet. Go well Erwin Vermeulen. The Dolphins & Whales of the World, as well as "Let's Face It" are with you! 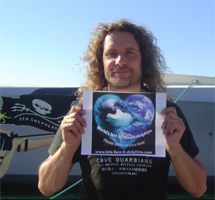