American folk rock singer-songwriter, film maker, surfer, and musician. In 2001, he achieved commercial success after the release of his debut album, Brushfire Fairytales. He has since released four more albums, a number of EPs and surfing movies/soundtracks.

He is also known for organizing an annual event, the Kōkua Festival. Notable songs from Johnson's repertoire include "Upside Down"; "Flake"; "Sitting, Waiting, Wishing"; "If I Had Eyes"; "You and Your Heart"; "Taylor"; "Banana Pancakes" and "Better Together".

Johnson and his wife created the Johnson Ohana Charitable Foundation after his third album to benefit the children of Hawaii and promote environment awareness. Johnson and his family work hard every year at festivals and concerts alike, to raise money for causes they feel are most important. 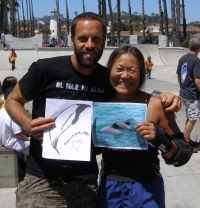