John Calambokidis is a Research Biologist and one of the founders of Cascadia Research, a non-profit research organization formed in 1979 based in Olympia, Washington. His work has been covered on shows by Discovery Channel and others and has been featured in National Geographic TV specials and a magazine article in 2009.

As a Senior Research Biologist at Cascadia Research he has served as Project Director of over 100 projects. He has authored two books on marine mammals ( the award-winning Guide to Marine Mammals of Greater Puget Sound from Island Publishers, with R. Osborne and E.M. Dorsey and Blue Whales from Voyageur Press, with G.H. Steiger) as well as more than 150 publications in scientific journals and technical reports. He has conducted studies on a variety of marine mammals in the North Pacific from Central America to Alaska. He has directed long-term research on the status, movements, and underwater behavior of blue, humpback, and gray whales. 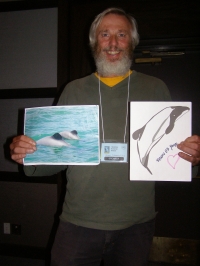