Music to the Ears about Too Much Noise for Maui's Dolphins

After numerous e-mails and phone calls by Peggy Oki (Coordinator of "Let's Face It" Visual Petitions) since February (2013) pushing to formulate a group letter of concern to DOC with request for protocols including necropsy to determine cause of death in any cetaceans found in proximity to zones of seismic testing we gladly announce that the Society for Marine Mammalogy (SMM) is urging the New Zealand government to halt seismic testing in Maui’s dolphin habitat immediately.

In a letter to New Zealand’s Prime Minister the SMM expressed concerns about seismic surveys in the home of Maui’s dolphins, the rarest dolphin species on earth. The President of the Society Prof. Helen Marsh said that "allowing seismic testing in the dolphins’ habitat may harm their hearing and push them into unprotected areas, where they are more exposed to fishing nets. The impact on the 55 remaining Maui’s dolphins could be devastating. Allowing this seismic testing appears inconsistent with the New Zealand Government's stated goal of enabling this subspecies to recover..."

In a letter to New Zealand’s Prime Minister, the Society for Marine Mammalogy (SMM) urges the government to immediately halt seismic testing in Maui’s dolphin habitat. With a membership of some 2,000 scientists from 60 countries, the SMM is the world's largest professional body dedicated to research on marine mammals and the ecosystems that support them. The SMM’s letter is concerned with seismic surveys off the west coast of New Zealand’s North Island, which is the final refuge of the little known Maui’s dolphin, the smallest and rarest dolphin on earth.

The SMM states that allowing seismic testing in the dolphins’ habitat may harm their hearing and push them into unprotected areas, where they are more exposed to fishing nets.

We applaud SMM for earlier this year sending a letter concerning the review of the Threat Management Plan for Maui's dolphins.

Say NO to seismic testing
in the habitat of the LAST 55 Maui's Dolphins!!!

Please sign this online petition:
"Save the Maui Dolphin - ban the seismic testing" 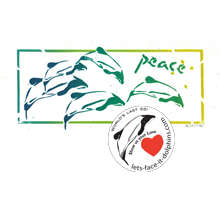