Tony Alva (born September 2, 1957) is an American skateboarder most prominently known as one of the original members of Z-Boys skateboarding team. He is considered one of the most influential skateboarders of all time. Alva is featured in the documentary on Venice Beach skate culture Dogtown and Z-Boys which was fictionalized into the 2005 feature film Lords of Dogtown. He also played the role of Tony Bluetile in the 1978 film, Skateboard: The Movie. Tony Alva signed a three year deal with Vans shoes and his pro model high-top was released in 2006. Tony Alva was featured in the video game, Tony Hawk's American Wasteland. In 2012 he appeared on an episode of the A&E reality series Storage Wars to appraise a skateboard. 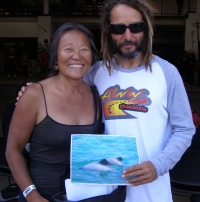