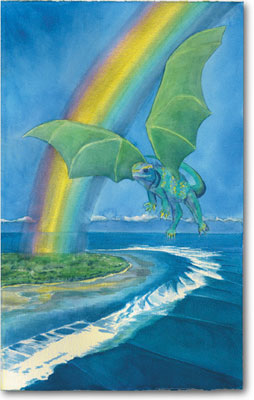 Because in Native American lore, lizards and dragons, are considered the guardians of dream time, I wanted to do a painting of them. Because the dragons are about protection, I placed the dragon over an area in the world that is a wildlife preserve, on the island of Java. It is also a world famous surf destination called "Grajagan".

Surfers staying there must sleep in raised huts on tall poles to be safe in the evening when large predatory cats, such as Jaguars have been known to prowl. One area of beach was named "Tiger Tracks", because in the morning, surfers would find Tiger tracks in the sand. A friend who was there a year ago told me that the Tigers are no longer there.

The estimated population of the Tiger (Panthera tigris), a century ago, was at 100,000. Current estimates are that only 2,500 Tigers may remain on this Earth (approximately 4% remaining.). They are threatened by many factors, including growing human populations, loss of habitat, illegal hunting of the tiger and the species they hunt, and expanded trade in tiger parts for traditional medicines.