Crusade to Save the Innocents

Once upon a time, Sir James Hector discovered and named a group of dolphins among the world’s smallest in size. Inhabiting the southern waters of Aotearoa, the islands that people later called New Zealand, these Hector’s originally numbered around thirty-thousand. And not so long ago, about twelve-hundred of their very close kin (a subspecies of the Hector’s) graced the northwest shores of the north. The first humans on this land, the Maori, named them ‘te Ika a Maui’.

People have delighted in witnessing the Maui play with seaweed, leaping, chasing other dolphins, blowing bubbles, play fighting, and surfing, …what athletes! (Please watch video at bottom of page.) Who would not be in awe of such athleticism by these creatures living a free enviable life in the sea?

Fast forward to just about three decades ago, when modern man set out on vessels with engines to trawl with great nets, seeking fortune in capture of what seemed an endless bounty of fish to be taken from the sea. Unfortunately, these nets were unseeable to the little Hector’s and Maui’s. And so began the circumstance of many of their kind, thousands becoming entangled, trapped, drowning, as populations slipped away.

Some of the people noticed and worried for good reason. Since the gillnet trawlers entered the waters, less than one-quarter (approx. 7,200) of Hector’s, and an estimated 55 Maui’s (less than 6%) are left today. Seeing the future of the Maui’s hanging by a thread, those among the caring and wise have been calling upon those that govern New Zealand’s resources to save the little ones from the main cause of death: drowning in nets.

In the address to International Union of Conservation Nations (IUCN) members, New Zealand head of delegation, Andrew Bignell, claimed action had already been taken to protect the endangered dolphins, and the recommendation was not backed by scientific evidence.

Yet ”Scientists have estimated that only one dolphin can die from a human-related death every 10-23 years without affecting the survival of the species. “We have already had one death in January. Given the few remaining Maui’s left, we can’t afford to lose a single dolphin,”

And the people are speaking:

"…why doesn't this Government take this threat seriously? It should immediately ban all gill nets and trawlers from where these dolphins are found, which is offshore to the 100m depth contour and within all harbours along the west coast of the North Island," (Ms Katrina Subedar of Royal Forest and Bird Protection Society of New Zealand)

”…the Government was putting the interests of a handful of fishermen ahead of the safety of threatened dolphins." (Green Party MP Gareth Hughes)

“a disgrace …It beggars belief that the New Zealand Government could oppose a motion to protect these incredibly vulnerable dolphins in our own waters," (Ruth Dyson, Labour MP)

Could it be so plain to see?

Four years ago a party of commercial fishermen “…filed a lawsuit challenging the Minister of Fisheries' decision to introduce a series of restrictions on set netting, drift netting and trawling.”

So it was no surprise that "Taranaki fishermen have backed the Government's stance of voting against further protection for the endangered maui's dolphin."

As a Matter of Facts:

World Wildlife Fund convened a summit of the world's leading cetacean experts in January 2002 in Annapolis, Md., which was attended by 25 scientists from six continents. The group reached consensus that the single biggest threat facing cetaceans worldwide is death as bycatch in fishing gear.

More whales, dolphins and porpoises die every year by getting entangled in fishing gear than from any other cause. Researchers at Duke University and the University of St. Andrews in Scotland estimate a global annual average of nearly 308,000 deaths per year - or nearly 1,000 per day.

Fishing gear that poses the biggest danger to cetaceans includes: gillnets, set nets, …gillnets are responsible for a very high proportion of global cetacean bycatch. Experts agree that wherever there are gillnets, there is cetacean bycatch.

"In particular, entanglement of small odontocetes in set-gillnet and drift-net fisheries is an issue of widespread conservation significance. In many areas, where monitored, bycatch in fisheries exceeds sustainable limits for dolphins, porpoises, and small whales, but many if not most regions of the world lack adquate monitoring.” *

Food for Thought and Words of Wisdom:

“When one tugs at a single thing in nature, he finds it attached to the rest of the world” - John Muir

"...reduced biodiversity affects ecosystems at levels comparable to those of global warming and air pollution,"

Scientists have only recently begun to qualify the important roles that cetaceans may play in the ocean's ecosystem. Hence the loss of one key species such as these dolphins could adversely impact the same fisheries that threaten their extinction.

“If it's unenvironmental it is uneconomical. That is the rule of nature” (Mollie Beattie, Director, US Fish and Wildlife Service 1993-1996)

Valour, Choosing to Honour International Agreement, Biodiversity, and the Soul*

“New Zealand is a signatory to the Convention on Biological Diversity (CBD) and as such made a formal commitment to the Convention’s Strategic Goals for 2011 to 2020. * …This includes the obligation to ensure that “the extinction of known threatened species has been prevented and their conservation status, particular of those most in decline, has been improved and sustained.”

Additionally “the New Zealand Fisheries Act 1996 is set out in Section 8 as providing ‘for the utilization of fisheries resources while ensuring sustainability.’ * “Ensuring sustainability” …avoiding, remedying or mitigating of any adverse effects of fishing on the aquatic environment.” Decision makers are required to take into account that “associated or dependent species should be maintained above a level that ensures their long-term viability”, that biological diversity is maintained…”

"Meanwhile News from Other Lands”

In the USA, The National Marine Fisheries Service, as the “federal agency charged with protecting marine mammals settled a court case yesterday by pledging to finalize and implement protections for false killer whales by Nov. 30, 2012. False killer whales (Pseudorca crassidens), which are actually large dolphins, have suffered unsustainable levels of death and serious injury in Hawaii-based longline fisheries.

The government of Bolivia pilots new social and economic model based on protection of and respect for nature. ”...legally bound to prioritise the wellbeing of its citizens and the natural world by developing policies that promote sustainability and control industry.”

"Earlier this year, more than 32,000 people submitted on the measures around Taranaki, with 76 per cent of submissions calling for greater protection of Maui’s dolphins."

Conversely, in September 2012, New Zealand was the only member nation among the nearly 600 members of the IUCN that voted against measures needed to save the Maui’s and Hector’s Dolphins from extinction.

The conflict of saving these dolphins from extinction may be resolved in sustainable ways* for the good of all. The New Zealand government has reopened the door till 12 November 2012 for public comment on a review of the Maui’s Dolphin Threat Management Plan (TMP).

How much do we value the complex role this species plays in New Zealand's coastal habitat? And how much do we value through their simple state of being, the Maui’s & Hector’s Dolphins’ promise to fill our hearts with inspiration? Let us remind these officials that through honour and wisdom, we can assure essential biodiversity for a healthy environment, and peace for the sake of all souls connected.

“Many alternative fishing methods are available. These include fish traps and a range of hook and line methods. These are already being used around NZ. For example, fish traps are being used to catch ling in the Otago area and to catch blue cod in Foveaux Strait. These look like a slightly larger version of a crayfish trap. With openings for the fish to swim into them and bait inside the trap. Hook and line methods (long lines) are being used in Cook Strait to catch hapuku (groper), in the Hauraki Gulf to catch snapper, and in many other areas around NZ. The vast majority of marine recreational fishers (a ministry of fisheries study estimates more than 90%) do not use gillnets.

The good news is that these more selective, sustainable fishing methods are much better for the fishing industry as well. Not only do they avoid bycatch of dolphins, seabirds and unwanted fish species. But fish of the wrong size can be removed from the trap and put back into the water alive. Most fish that comes out of a gillnet or trawl is dead. So these net fisheries are very wasteful. In the long term, selective, sustainable fishing methods are in everyone’s interest, including the economic interest of the fishing industry.” 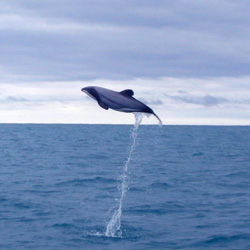