Hannah-Beth Jackson is an educator, former State Assemblymember, and former Deputy District Attorney. She was elected to represent the 35th Assembly District, encompassing large portions of Ventura and Santa Barbara Counties, from 1998 to 2004.

During the six years she served in the California Legislature, Hannah-Beth was an effective advocate for improving public education, increasing public safety, improving access to health care, promoting job growth in green industries and others, protecting the environment and protecting the privacy and rights of consumers. Hannah-Beth authored a number of significant bills on these and other issues, including financial privacy, crime victims, reproductive rights, domestic violence and childcare. Jackson worked with Democratic and Republican Governors and authored more than 60 bills that they signed into law.

She was named “Legislator of the Year” by the Consumer Federation of California for her strong advocacy on behalf of consumers, particularly in the areas of health care and privacy rights. Jackson was also named “Legislator of the Year” by the Congress of California Seniors for advocacy against elder abuse and health care issues and “Environmental Hero” by the California League of Conservation Voters for her unwavering protection of our natural resources and public health. The California Teachers Association named her “Outstanding Public Official” for her leadership in improving our schools. She was named “Legislator of the Year” by the National Organization for Women for advancing women’s health issues and equal opportunity and by the Junior League of California for her work on domestic violence and issues effecting children. Californians Against Waste named her legislator of the year after the passage of her bills to do with pesticide use and the recycling of electronic- waste. Hannah-Beth earned other awards including “Guardian of the Coast” by Vote the Coast, the “Outstanding Public Service Award” by the California School Employees Association, and Planned Parenthood’s “Giraffe Award” for sticking her neck out to do what is right. 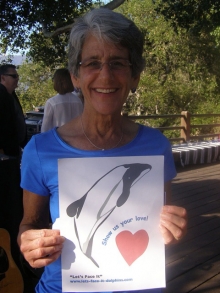