Join us in supporting our friend Ric O'Barry's Dolphin Project

“This is a rehearsal for the BIG one. We plan on taking the show to Japan,” says Ric O’Barry, whose life and work was featured in the Academy Award-winning film The Cove. “We’ll add a few Japanese friends to our lineup and rock the socks off Tokyo. There isn’t a better way to bring Westerners and Japanese people together than rock and roll and the world should also know about the wonderful relationship between Japanese people and dolphins in the Tokyo Islands,” added O’Barry. “Dolphins are respected and protected in this part of Japan. It's the opposite of Taiji, but very few people know about it. ‘This concert will hopefully change this by bringing positive, international media attention to what is right about Japan.”

"I'm thrilled to bring a bunch of heavyweights together for a fun night with fans," adds Matt Sorum, who has also played with Velvet Revolver. "The main thing is to keep creating awareness for the Dolphin Project and everyone involved."

KINGS OF CHAOS made its Australian live debut on April 20 at the Stone Music Festival at Sydney's ANZ Stadium. KINGS OF CHAOS toured South and Central America last year under the name ROCK 'N' ROLL ALLSTARS. The band will embark on a new South American tour at the end of November.

For tickets to “Tokyo Celebrates The Dolphin,” visit: https://dolphinproject.brownpapertickets.com/

For more information on Dolphin Project and KINGS OF CHAOS, visit: dolphinproject.org

Would you please add the following, which is the same, plus this announcement as is on this page to get people to collect LFI VPs? I updated the number of VPs here.

Peggy Oki will be collecting "Let's Face It" Visual Petitions at this event.*

*Parties, events, your workplace, farmers markets... are great places to collect a lot of Visual Petitions. Bring your camera along with your chosen image(s) of a Maui's/Hector's Dolphin and "Show Us Your Love"!! 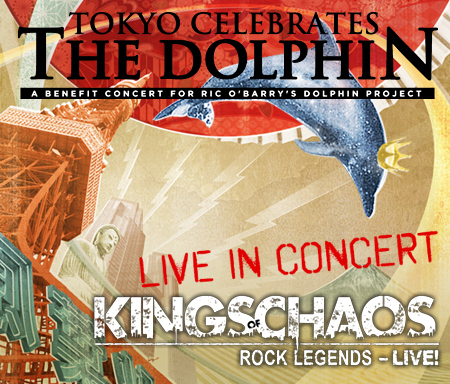