Like his brothers, Keith is a master of all forms of waveriding. Keith can surf anything and everything from 2' to 25' and was on the WQS tour for years and ended up qualifying for the WCT. Keith did the WCT for one year but decided that traveling and surfing with his brothers and friends, making movies, and having the freedom to go anywhere in the world on short notice for a huge swell was more to his liking. Keith and his brothers shocked the surfing community when they went outside of the industry and signed a sponsorship deal with environmentally friendly Patagonia. All three Malloys are a driving force behind the brand's ocean stores and conservation efforts.

Whether it’s a gun, a thruster or a pair of swim fins, his approach speaks of a lifelong commitment to the sea. After years of surfing in front of the lens, he recently stepped behind the scenes to direct the bodysurf film Come Hell or High Water. He lives in California with his family. 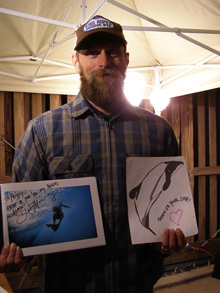