Steve Stevens is one of the most original guitarists to emerge from the 80's rock scene, best known for his 30 year partnership with Billy Idol, his work on Michael Jackson's "Dirty Diana", his Grammy Award winning performance on "Top Gun Anthem" & his work with Vince Neil on "Exposed".

Stevens catalog of hit songs that he co-wrote & performed alongside Idol include "Rebel Yell", "Eyes Without A Face" & "Flesh for Fantasy". They sound as fresh & relevant today as the day they were released, as evidenced by being recently covered by artists as varied as Miley Cyrus, Green Day, Queens of the Stone Age, Him, Black Veil Brides, Children of Bodom, Dope, Daughtry, Sum 41, Blink 182, Drowning Pool, Murderdolls, Deathstars & The Donnas. In addition to currently working on a new record together, Idol & Stevens continue to tour to sold out crowds all over the world.

Stevens has performed on numerous movie soundtracks in addition to "Top Gun", including "Matrix Reloaded", "Once Upon A Time In Mexico", "Speed", "Big", "Dogtown", "Coyote Ugly", "Look Who's Talking Too", "The Upside of Anger", "Ace Ventura; Pet Detective", "The Wedding Singer" and "Heavy Metal".

In 2010 Stevens welcomed reality TV cameras into his home & appeared alongside his wife, Josie, on the international hit E! channel show, "Married to Rock", which allowed viewers a look behind the curtains into his life, both on & off tour.

Josie is best known for her starring role on the hit E! channel reality TV show, “Married to Rock”, which aired in 120 countries, and she quickly proved to be a fan favorite.

Always upbeat, Josie creates fun wherever she goes. Self-described as “smarter than she looks,” this good-time gal with a heart of gold is always the life of the party.

Married to Grammy Award winning guitarist & composer, Steve Stevens (Billy Idol, Michael Jackson, Camp Freddy, Kings of Chaos), Josie was an in demand makeup artist and stylist to some of the worlds most popular music acts prior to her career as a TV personality.

Considered a rock n roll taste maker & notorious for her sexy & eclectic style, Josie launched her own line of clothing, “Josie Loves J Valentine” in 2011. The collection features costumes, club wear, rave wear, bikinis & accessories that reflect a mix of Tokyo street fashion, atomic space age influences & classic rock n roll looks, with an emphasis on having fun with fashion. Already a celebrity favorite, the line has been featured in music videos, tv shows, movies and magazines all over the world and nominated for several awards, including “best marketing campaign”.

Josie recently expanded her brand to include designing sleepwear in a collaboration with the worlds most popular adult footed pajama line, Jumpin Jammerz.

With over 1,000,000 followers on her social media pages, and a demographic of 87% females aged 15-35, she has become a popular host & spokesmodel for companies & events looking to target a youthful female market. 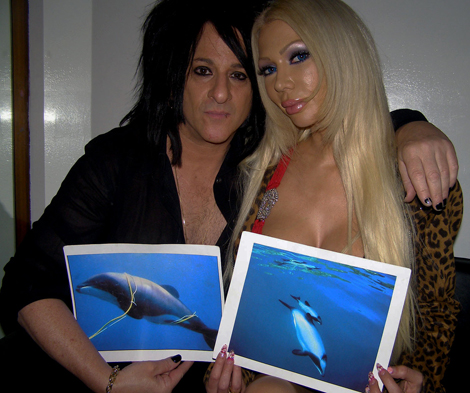