Singer, songwriter, and PETA Asia-Pacific’s 2008 Sexiest Vegetarian man. Making his way halfway around the globe, XAVIER RUDD, one of Australia’s most iconic voices today, is coming to the US for a string of tour dates in support of his recently released and critically-hailed seventh album SPIRIT BIRD (SideOneDummy Records; released June 5, 2012). A multi-instrumentalist, world class surfer, animal rights activist and nature conservationist, Rudd’s widespread appeal transcends genres and categories, creating an atmosphere that Aquarian Weekly describes as “easy, feel-good listening that musically keeps you interested for its entirety.” His legendary live performances replete with his indigenous didgeridoos, has been hailed by About.com as a communal dance party that “takes almost no time for the crowd to start its bouncing, twirling, and all-out dancing.”

Xavier so generously granted use of his song in our "Let's Face It" Visual Petition campaign video "Through the Dolphins' Eyes" produced by Dove Joans. 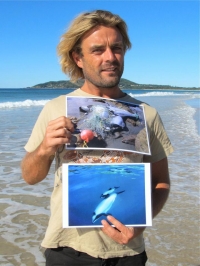